History of The Ford

The Ford was built in 1920 as the site of The Pilgrimage Play.

Its author, Christine Wetherill Stevenson, an heiress to the Pittsburgh Paint fortune, believed the rugged beauty of the Cahuenga Pass would provide a dramatic outdoor setting for her play. Together with Marie Rankin Clarke, she purchased this land, along with that on which the Hollywood Bowl now sits. An outdoor amphitheater with wooden seating, designed  by architect  Bernard Maybeck, was built on The Ford site, and the play was performed by noted actors every summer from 1920 to October 1929, when the original structure was destroyed by a brush fire.

The present theater, constructed of poured concrete and designed by architect William Lee Woollett in the style of ancient Judaic architecture to resemble the gates of Jerusalem, was built on the same site and opened in 1931. The Pilgrimage Play was again performed here until 1964, with brief periodic interruptions, such as those caused by World War II and the construction of the Hollywood Freeway. In 1941, the land was deeded to the County of Los Angeles. A lawsuit in 1964 forced the closure of The Pilgrimage Play due to its religious nature.

Christine Wetherill Stevenson built The Ford for her plays, naming it The Pilgrimage Theatre

The 1,200-seat amphitheater and an 87-seat indoor black box theater built underneath the amphitheater in 1971 were used intermittently for theater, jazz concerts and dance performances throughout the 1960s and ‘70s. 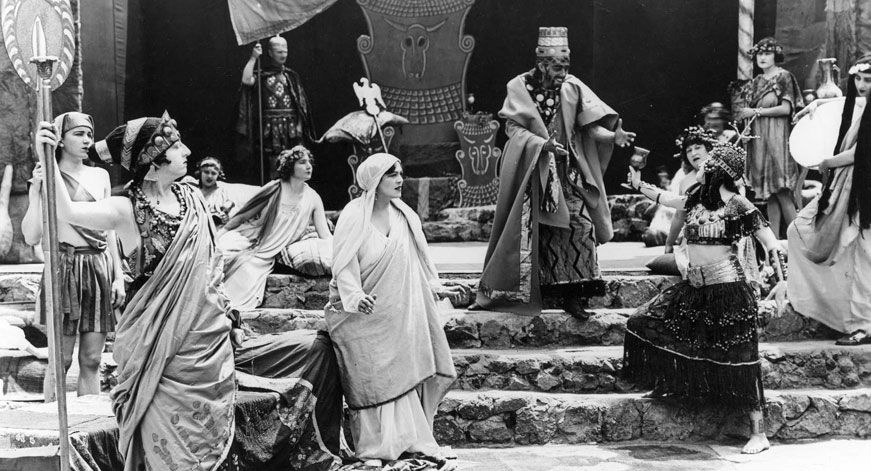 "The Pilgrimage Play" being performed 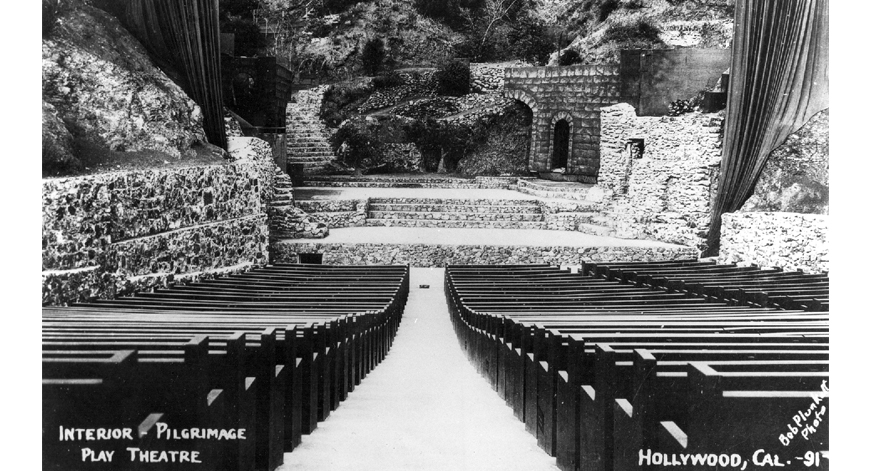 Highlights included a series of concerts by Jascha Heifetz and Gregor Piatigorsky in 1961, a 1964 production of King Lear directed by John Houseman and a long-running series of free concerts featuring such legends as Chet Baker, Stan Kenton and Louis Bellson. In 1976, the Pilgrimage Theatre was renamed the John Anson Ford Theatre in honor of the late Los Angeles County Supervisor's significant support of the arts. Ford (1883-1983)  helped  found the Los Angeles County Arts Commission, encouraged the Board of  Supervisors to support the building of The Music Center, and led the County's acquisition of Descanso Gardens, among many other achievements. After a brief stint as one of LA's premier punk music venues in the late 1980s (with legendary performances by Red Hot Chili Peppers, Jane's Addiction, and The Ramones), the amphitheater received renewed support from Los Angeles County, thanks to then County Supervisor Ed Edelman, who obtained funding for initial capital improvements to the facility and spurred the creation of The Ford's summer season (originally called "Summer Nights at The Ford") in 1993.

Originally a program of the Los Angeles County Arts Commission (which is now the Department of Arts & Culture), The Ford's summer season was designed to enable Los Angeles County music, dance, film and theater groups to produce performances successfully in a major venue.

Unlike a typical presenting model, groups and producers were selected  through a competitive application process (Artists Partnership Program) and received front-of-house, production and marketing support while keeping the bulk of the Box Office proceeds. From that first summer series in 1993, the program has blossomed, supporting hundreds of local arts organizations and producers over the years.

The Ford is dedicated to presenting a diverse roster of events, representing music and dance styles reflective of the communities that comprise Los Angeles County. In addition to its multidisciplinary summer season, in a full summer season, The Ford presents interactive participatory arts events at its amphitheater and at public sites across the County, as well as a Saturday morning family series that is free for children. 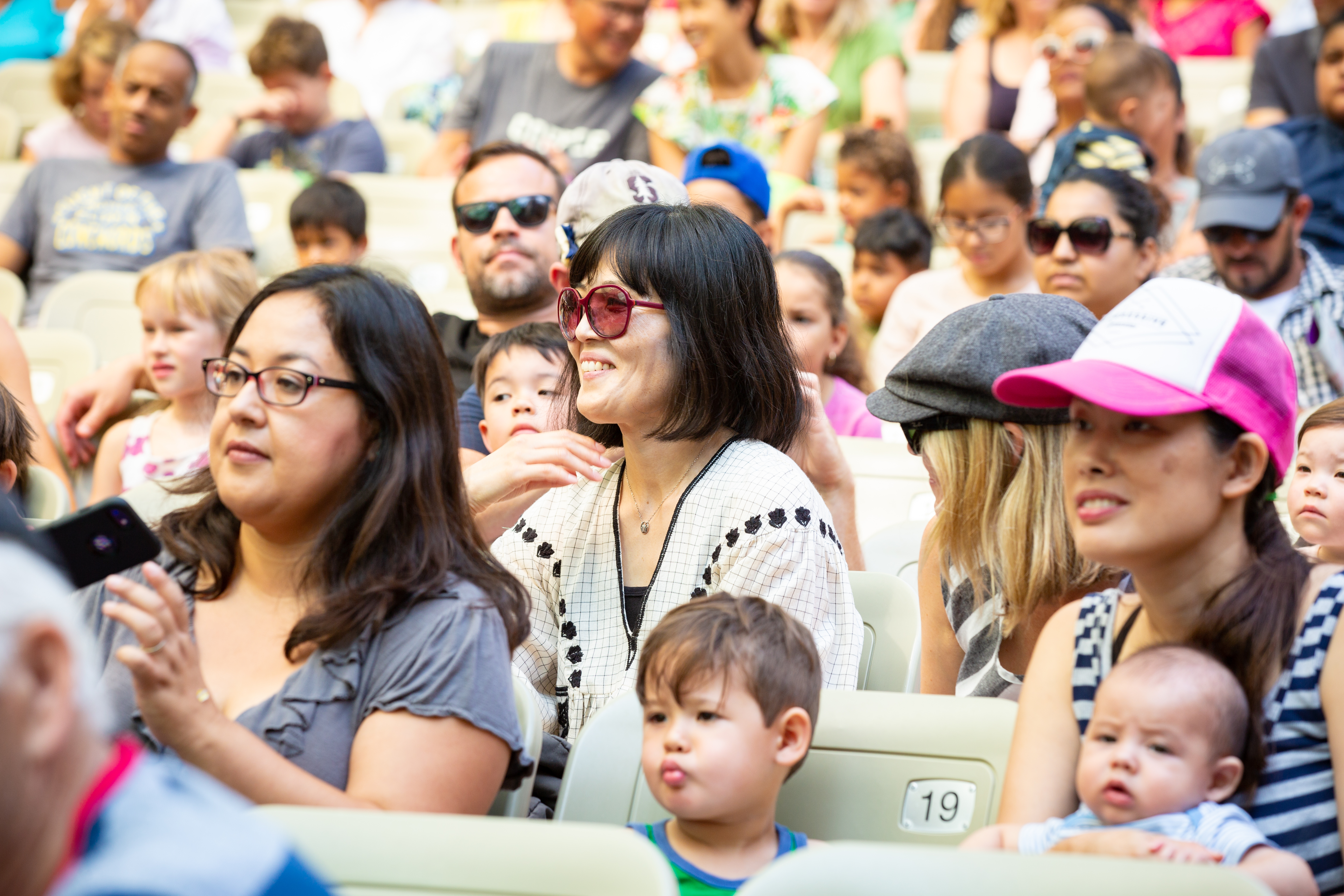 In 2008, noted architectural firm Levin & Associates was brought on to draft The Ford Theatres Project, a comprehensive multi-phased plan that provided for the rehabilitation of this historic facility and addressed needed improvements that has substantially impacted the audience and artist experience.

Implementation of the plan began in 2013 with the installation of new seats and the restoration of the iconic neo-Judaic structure to its original unpainted concrete. The $80 million renovation project was designed by Levin & Associates Architects with Mia Lehrer + Associates landscape architects and began in September 2014, after certification of the EIR for the project.

The project addressed hillside stabilization and drainage improvements, reconstruction of the amphitheater stage, a new theatrical lighting and audio package, replacement of the sound wall and control booth, a new picnic and performance terrace that includes a raised deck above a loading dock and a two-story structure comprising a lower-level concessions kitchen and upper-level office space. The renovations were completed in 2017.

The Los Angeles County Board of Supervisors transferred the operation of The Ford to the Los Angeles Philharmonic Association in December 2019, with programming originally planned to start with the 2020 season. The venue was forced to shutter due to the COVID- 19 pandemic and the 2020 season was canceled. The 2021 season is the first under the operation of the LA Phil. 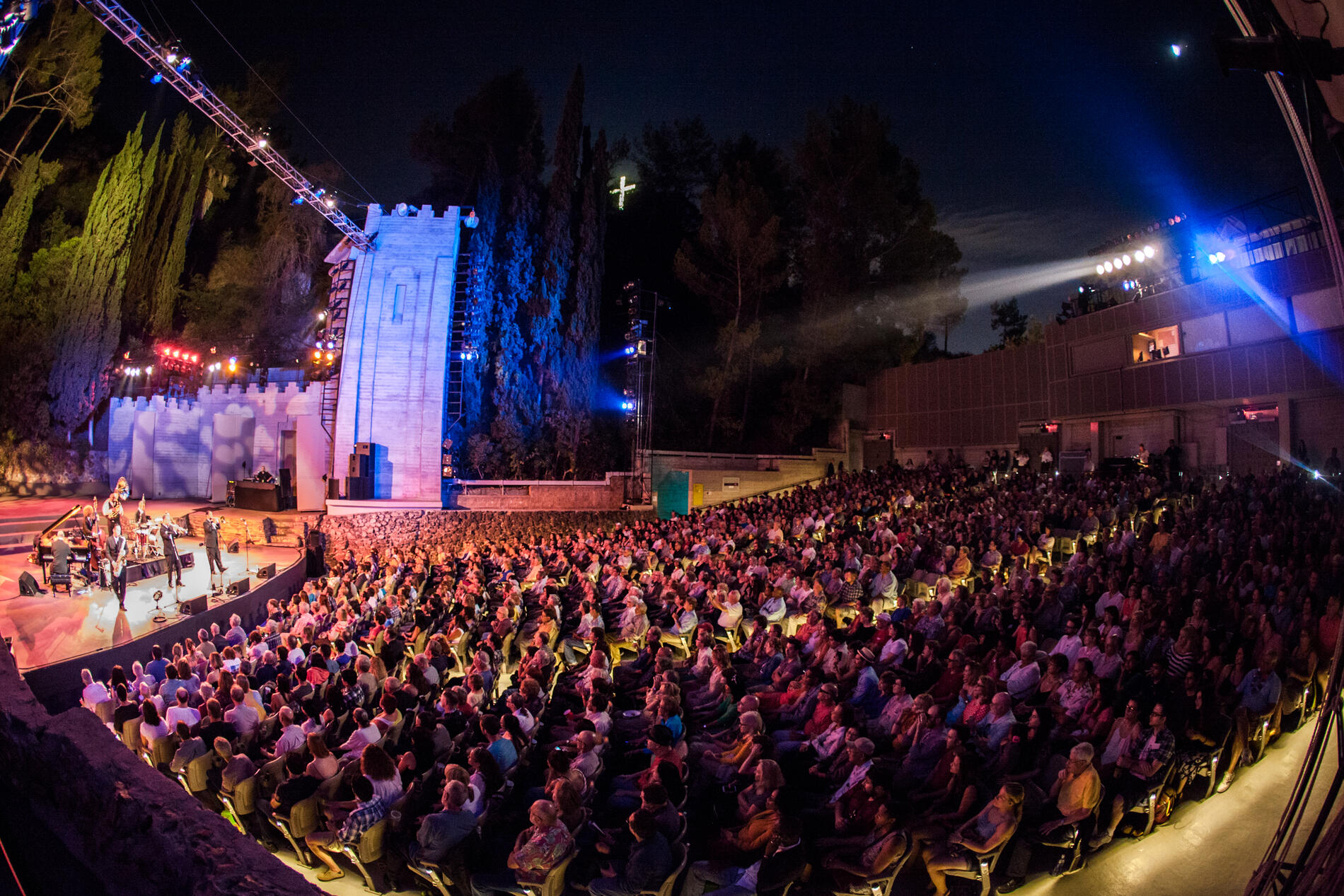